Congratulations  to new Richmond Unit VP, Mr. Clair Rankin from St. Peters and to Nancy Marchand who was elected as Unit Secretary-Treasurer. A special thank goes out to Kelsey Bowman-White for allowing her name to stand for election. Thank you to all who came out on a cold Saturday morning on a long weekend.

Due to unforeseen circumstances the Special Meeting to hold Unit Elections, the date and time have been changed. The new date is SATURDAY, FEBRUARY 15, 2020 at 10:00 AM. The location is still REC/A in Louisdale. Be sure to come out.

There will be a Special Meeting for members of the Richmond Unit of CUPE  Locall 955 to hold Unit Elections.    Offices up for election are : Unit Vice-.President and Unit Secretary-Treasurer.

The meeting will take place on Saturday, February 8 at 11:00 AM.   The location will be at Richmond Education Centre/Academy. 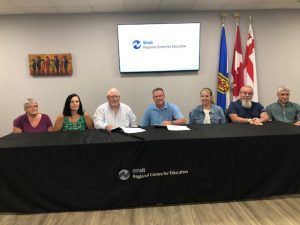 The Negotiating Committee for CUPE Local 955 and representatives for the Strait Regional Centre for Education met on August 28, 2019 and officially signed our new Collective Agreement. We would like to thank CUPE’s Education Coordinator and Lead Negotiator, Grant Dart, for all of his work leading to this Agreement.

The Executive of CUPE Local 955 are pleased to announce the Membership has voted to accept the proposed agreement with the Strait Regional Centre for Education. We would like to thank all of those who came out under short notice to exercise their right to be heard and to vote.

CUPE Local 955 and the Strait Regional Centre For Education have reached a tentative contract agreement.

A meeting will be held this SUNDAY JUNE 23 to review the proposed contract changes and to conduct a ratification vote.

This meeting will be held at 1:00 pm in the SAERC Auditorium in Port Hawkesbury.

Please make every effort to attend this very important meeting

Please be advised that the Provincial Bargaining Table has reached a tentative agreement. One of the issues agreed upon was to reopen Local Table negotiations on certain specific issues. The Center for Education has agreed to go back to the table on June 20th (tentative). Grant Dart, CUPE School Board Coordinator will lead the Bargaining Committee at the table until a collective agreement is reached.

Subject to further discussion are the following issues:

Please stay tuned for further updates or notice of ratification meetings following the conclusion of negotiations.

If the collective agreement ratification precedes any Local or area meetings, new members can be sworn in at the ratification meeting. Notice of meeting times and locations will be posted to all locations and on the Local 955 website.

The meeting will be held at S.A.E.R.C. in Port Hawkesbury

Elections will be held for : Recording Secretary and

Please note the change in date. Many of Members had requested a change in the date because our usual June dates conflict with the commencement of many end of School Year activities.

CUPE SURVEY ON SHORT-TERM LEAVE, VACATION AND OTHER LEAVE APPROVALS FOR EDUCATION WORKERS

CUPE is looking for your help. As you are all well aware, there is a constant issue with a lack of spares and absences going unfilled. We are conducting a survey and looking for your input.

The survey can be found here: CUPE SURVEY

If you wish to take part in the survey, you can download a copy , fill it out, and return it by way of the Board Courier to : Donald Stewart c/o Operations.

It cannot be filled out on line. Please have all responses back by April 4, 2019

The Fall General Meeting of CUPE Local 955 will be held on December 8 at 10:00am at S.A.E.R.C. in Port Hawkesbury. A review of proposed changes to the Local Bylaws will be on the Agenda

On October 23, Strait Regional Centre for Education Staff and the CUPE Local 955 Negotiation team met with Mr. Peter Lloyd, a Conciliator from the N.S. Dept. of Labour. Some progress has been made, but we still do not have an agreement at this time.

We thank you and ask for your continued patience. We will advise you when we have more information to present.

There are no upcoming events.